Willingly living with two female dogs is not something that many people would recommend, as it turns out that bitches get in more (serious) fights than any other pairing (male-male and male-female).

But every dog is an individual, and simply having a two-bitch household doesn’t mean that you’re headed for all-out warfare.

Pyrrha and Eden certainly went through a “settling-in” period when we brought Eden into the household. I was worried that their almost daily squabbles boded ill for their ability to peacefully coexist.

1: Pyrrha gets feisty when I am reintroduced

One of the big things I’ve learned is that I am often the unwitting instigator. Any real fight they’ve had or almost had has involved me. This is always how it goes down: I walk into the yard (or enter a room after an absence). Pyrrha jockeys for my attention. Eden follows suit. Pyrrha snarks at Eden. Eden snarks back. Things escalate (until a human intervenes and separates them for a cooling-off period).

Pyrrha is extremely bonded to me, which is flattering, but it’s something she has trouble putting out of her mind when other dogs are around. I don’t think she’s resource-guarding me, though, or maybe it’s a variation on that general theme. She doesn’t ever “guard” Eden from me in other contexts; she has no problem with me petting Eden or in letting Eden come up to me while she’s there.

It’s always just these “introduction scenarios” that get her amped up: me walking into the yard or room after I’ve been gone for a while. I’m not sure why this is or where it comes from. More dog-behavior-savvy people, care to chime in? Why do you think my “reintroduction” into a scenario makes Pyrrha want to go for Eden?

2: Pyrrha is learning how to defer to Eden

This one has surprised me, actually. A lot of the tension we had at first came from Pyrrha being unwilling to back down from a taunt or threat from Eden. Lately, however, Pyrrha has done an admirable job of “turning the other cheek.”

If Eden decides to snark or taunt, Pyrrha will turn her face or body and just move away quietly. This newfound maturity of hers has also led to a decided decrease in squabbles.

3: On the whole, they play together a lot more

And this is so heartwarming and encouraging. Watching them play tag in the backyard or gently wrestle on the kitchen floor are some of my greatest joys. 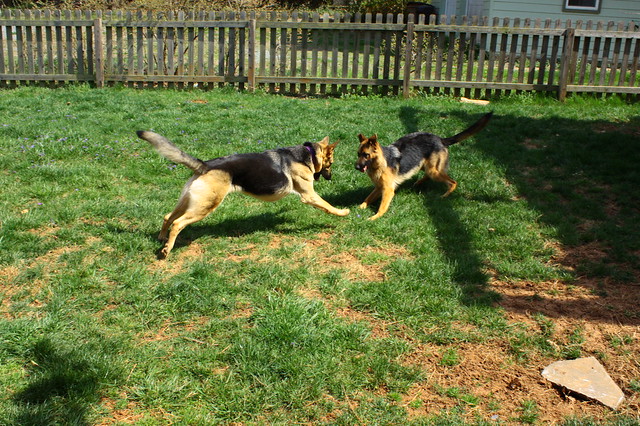 Predictable scenes of love and affection

I love our two girls. Would I do two girls again? Maybe not. Every dog is different, and some girls will exist together without any issues for the entirety of their lives, but bitches do seem to have more problems. I’ve got 99 problems and a bitch IS one. 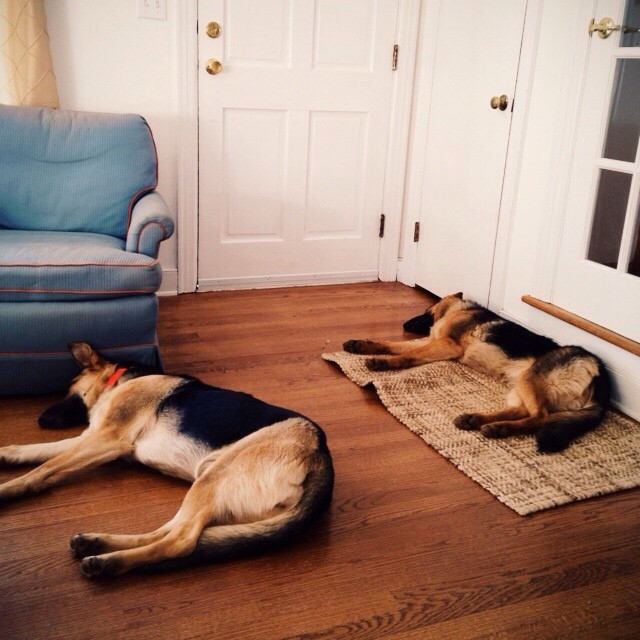 If you have multiple dogs in your household, how would you characterize their relationship? How do you think they feel about each other?