On the heels of my post about the dynamics between our two girls, I am happy to report that we had a successful first road trip with both of them.

They were both a little antsy about being in the back seat of our little hatchback, but eventually they settled down and were able to sleep. Finally, THIS even happened, which blew my mind: 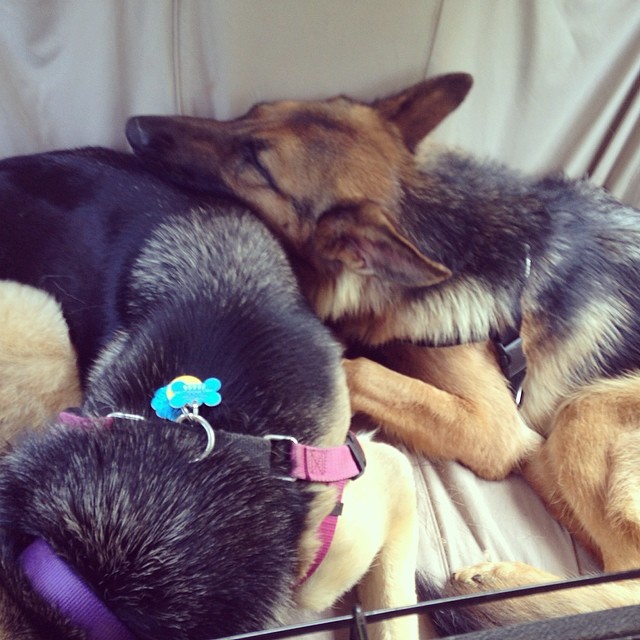 Pyrrha is very touchy about her personal space, so I was kind of amazed that she let Eden do this. It’s also really adorable.

EDEN REPORT: My dad is in love with Eden, and the two of them were inseparable the whole weekend. He essentially took care of her the entire time we were there; it was amazing! Every morning, they went for a run together or went rollerblading around town, and then in the afternoons, he played Frisbee with her and Dublin. (I shouldn’t have been worried about how Dublin and Eden would interact; Dublin is a champ, and she gets along with everyone.) Because of this, Eden had a rather hard time calming down indoors, because she was following Dad around the entire time, waiting for him to go outside and play with her.

PYRRHA REPORT: Pyrrha seems really comfortable at my parents’ house now, which is so encouraging to see. My immediate and extended family showed up at various points over the weekend, and we had a noisy house full of nearly 15 people. But Pyrrha just took it all in stride. Just about everyone came up to me to say how impressed they were with how much she’d calmed down and how easygoing she seemed. It always warms my heart. It’s hard for me, being so close to her, to actually recognize her progress, so it’s encouraging to hear it from people who don’t see her every day and can track how she’s grown in confidence and calmness.

Here she is getting some love from my cousin: 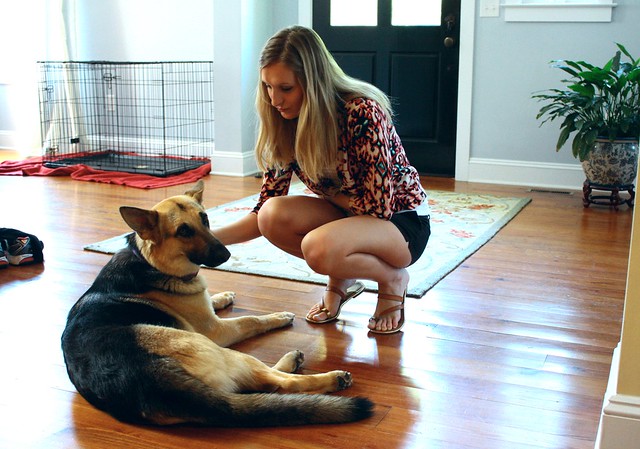 On Saturday morning, Guion and I walked Pyrrha to the farmers’ market and Dad rollerbladed there with Eden. We kept Pyrrha on the periphery of the event, because there were a lot of people, dogs, and children, but she was admirably composed. She even met a little girl who was specifically afraid of German shepherds and quietly and calmly licked her hand. She had just one outburst, toward a maltese on a retractable leash (ugh, bane of my existence), which was my fault for not getting away quickly enough. It’s hard to get away when those dogs are on those idiotic leashes! But, in the wider scheme of things, I was proud of how she handled all of the dogs and little kids. (Edie continues to be untroubled by crowds, kids, and other dogs, which we are perpetually grateful for.) 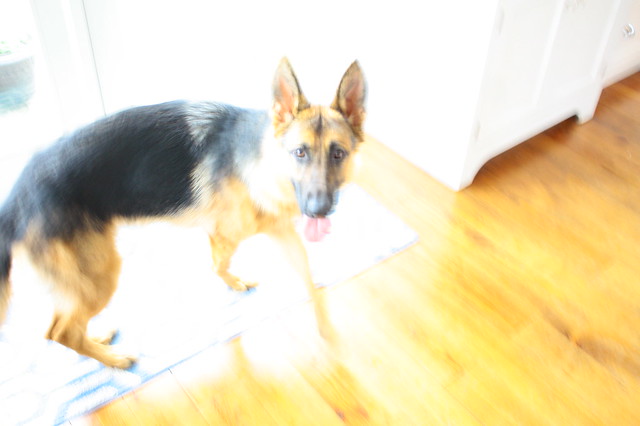 Overall, it was a good excursion to bring both girls to my parents’ house, as my parents will be watching them for three days at the end of this month while Guion and I are at a wedding. Fingers crossed that they have another good experience with our crazies!

4 thoughts on “A successful first trip with the dogs”