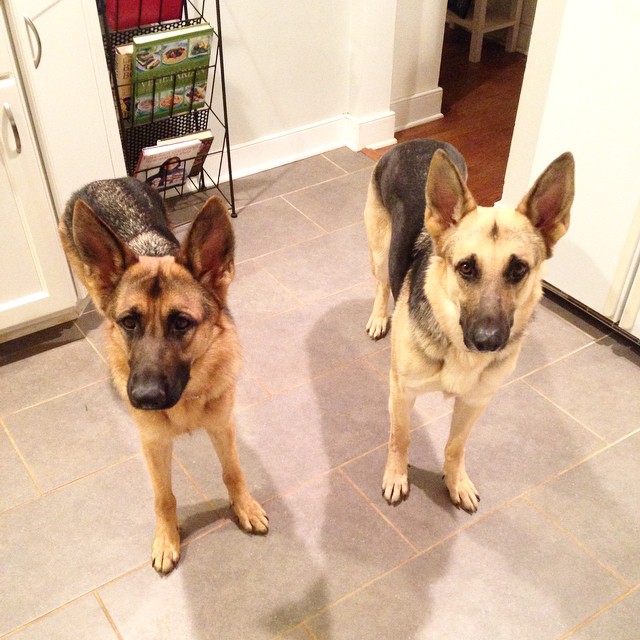 So. Here’s the behavior, which has more or less been happening since we adopted Eden:

When I come home during the day to let them outside, Pyrrha freaks out and redirects her excitement in the form of aggression toward Eden. Pyrrha growls at her, nips at Eden’s neck, and generally just fusses and sasses (barking, growling) in Eden’s face until they get outside. And even once they are outside, Pyrrha continues this general antsy, aggressive behavior for a minute or so until she can control herself. Eden, the poor thing, is usually a bit afraid to venture out into the yard until Pyrrha calms down, and I don’t blame her. I, too, dislike being chomped on the neck without good cause.

Fights are not necessarily started, but Pyrrha will body-slam Eden for a minute or more until she seems to regain her right mind. The more I try to physically intervene, the more ramped up Pyrrha seems to get. My tactic so far has been to let Pyrrha out into the yard first, let her chill a bit, and then let Eden out. This works most of the time, but I acknowledge it’s not getting at the root of the issue, because Pyrrha still reacts this way every time I come home.

My bigger questions are: What is causing this behavior? What does it mean?

My simplest guess is that Pyrrha is just REALLY excited when I come home, and she doesn’t know how to properly handle this emotion, and so she expresses it in excitable aggression toward the closest target (e.g., Eden). Notably, she does not practice this behavior if Guion is the one to let them out (presumably because she’s not that excited when Guion comes home).

I want to figure out how to get Pyrrha to a place where she doesn’t feel like she has to react this way but being mystified to the cause leaves me with few solid, workable ideas.

So, my trusty, intelligent readers: How do you interpret Pyrrha’s behavior? What would you do if it were your dogs?