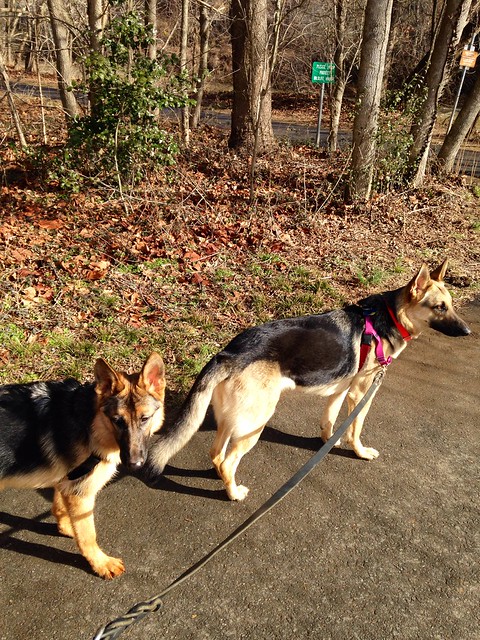 While I’ve been separated from our two monsters this summer, I’ve been thinking a lot about my poor leash-handling skills and the need to approximate off-leash walks in our small (but busy) town when we return in August. We have a lot of training to do, and I am excited about the continued challenge of working with our leash-reactive shepherds.

We have leash laws in my town and in our parks and on trails, so it will still be rare for our dogs to experience off-leash freedom, but I want to be able to simulate the experience of off-leash walking with them, as they are both leash reactive to other dogs.

I started thinking about Grisha Stewart’s Behavior Adjustment Training (BAT) again after reading Patricia McConnell’s recent review of Stewart’s new book, BAT 2.0. I read Stewart’s first book, but I don’t think I really let the principles of BAT sink in. (Clearly, I didn’t, because I still have two leash-reactive dogs.) I was also grateful to find this recent post from Anne at All Dogs Are Smart, which is very helpful and includes some great videos on how to teach loose-leash walking (with harnesses) as well.

I would like to apply some BAT leash-handling principles but also add a food reward. Our dogs are highly food motivated, and BAT often seems a bit too “mystical” for my taste (and I am not sure our dogs would discern any reward or positive reinforcement from some of its techniques, such as “mime pulling”).

Do you use BAT techniques? How do you help your reactive dog on walks?

Previously in this series of thinking about dogs off leash:

2 thoughts on “Do you use BAT and leash skills?”