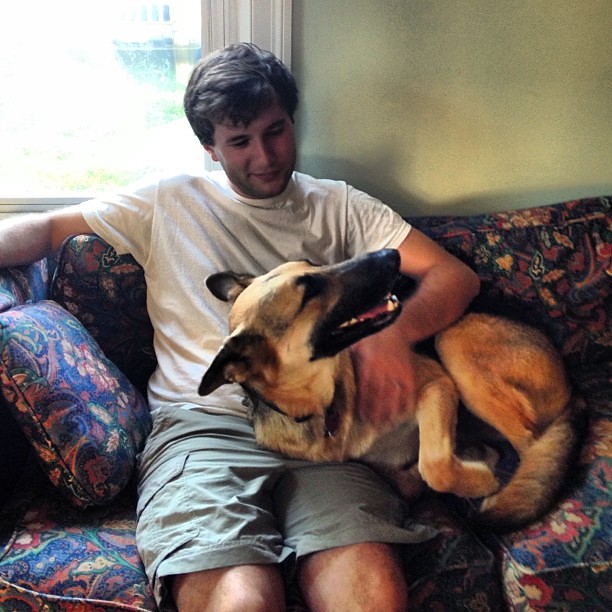 “Compassion for animals is intimately associated with goodness of character, and it may be confidently asserted that he who is cruel to animals cannot be a good man.”

— Arthur Schopenhauer, The Basis of Morality

(Photos from September 2013 of my husband and our foster pup Draco, who came from an abusive/hoarding situation in West Virginia. He was such a cuddler! Dogs’ capacity for forgiveness of human beings never fails to astonish and humble me.) 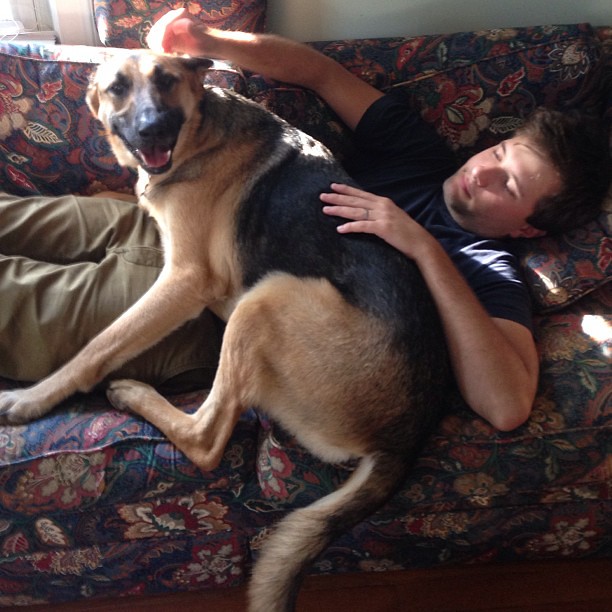 And happy 29th birthday to my husband, whose compassion for animals qualifies him as a good man, and who very patiently puts up with my dog craziness.

Long ago we quit lifting our heels
like the others—horse, dog, and tiger—
though we thrill to their speed
as they flee. Even the mouse
bearing the great weight of a nugget
of dog food is enviably graceful.
There is little spring to our walk,
we are so burdened with responsibility,
all of the disciplinary actions
that have fallen to us, the punishments,
the killings, and all with our feet
bound stiff in the skins of the conquered.
But sometimes, in the early hours,
we can feel what it must have been like
to be one of them, up on our toes,
stealing past doors where others are sleeping,
and suddenly able to see in the dark.

So, again, not exclusively a dog poem, but I like musing on this concept, that we humans may bear some deep evolutionary connections to the animals we once were and thus unburden the way that we move.

Hope that you have a peaceful and joyful weekend ahead of you. Step lightly!

It’s not exactly a dog poem, but I think it is so striking and thought-provoking. Poem by Liesl Mueller, featured in her Pulitzer Prize-winning collection Alive Together.

“I will take care of you,” the girl said to her brother, who had been turned into a deer. She put her golden garter around his neck and made him a bed of leaves and moss. — from an old tale

Enchanted is what they were
in the old stories, or if not that,
they were guides and rescuers of the lost,
the lonely, the needy young men and women
in the forest we call the world.
That was back in a time
when we all had a common language.

Then something happened. Then the earth
became a place to trample and plunder.
Betrayed, they fled to the tallest trees,
the deepest burrows. The common language
became extinct. All we heard from them
were shrieks and growls and wails and whistles,
nothing we could understand.

Now they are coming back to us,
the latest homeless, driven by hunger.
I read that in the parks of Hong Kong
the squatter monkeys have learned to open
soft drink bottles and pop-top cans.
One monkey climbed an apartment building
and entered a third-floor bedroom.
He hovered over the baby’s crib
like a curious older brother.
Here in Illinois
the gulls swarm over the parking lots
miles from the inland sea,
and the Canada geese grow fat
on greasy leftover lunches
in the fastidious, landscaped ponds
of suburban corporations.
Their seasonal clocks have stopped.
They summer, they winter. Rarer now
is the long, black elegant V
in the emptying sky. It still touches us,
though we do not remember why.

But it’s the silent deer who come
and eat each night from our garden,
as if they had been invited.
They pick the tomatoes and the tender beans,
the succulent day-lily blossoms
and dewy geranium heads.
When you labored all spring,
planting our food and flowers,
you did not expect to feed
an advancing population
of the displaced. They come,
like refugees everywhere,
defying guns and fences
and risking death on the road
to reach us, their dispossessors,
who have become their last chance.
Shall we accept them again?
Shall we fit them with precious collars?
They scatter their tracks around the house,
closer and closer to the door,
like stray dogs circling their chosen home.

Apologies for the lack of posts lately; life has been so busy and I have really not had time for blogging. I will still be updating Pyrrha’s adventures and our progress with her, but the posts may be a little less regular than they were. Hope that you all have excellent weekends!

“We need another and a wise and perhaps a more mystical concept of animals. Remote from universal nature, and living by complicated artifice, man in civilization surveys the creature through the glass of his knowledge and sees thereby a feather magnified and the whole image in distortion. We patronize them for their incompleteness, for their tragic fate of having taken form so far below ourselves. And therein we err, and greatly err. For the animal shall not be measured by man. In a world older and more complete than ours they move finished and complete, gifted with extensions of the senses we have lost or never attained, living by voices we shall never hear. They are not brethren, they are not underlings; they are other nations caught with ourselves in the net of life and time, fellow prisoners of the splendour and travail of the earth.”

Kind of a dramatic quote for today, but I like its basic meaning and premise. Happy Friday, everyone! I’m really excited today, because tonight we get to briefly meet Lyndi. Our home visit still won’t happen until next week, but her foster could tell that I was super-eager to meet her, so we get to see her ahead of schedule. I really hope she could be the ONE… We’ll see! Of course, I’ll keep you posted… in the midst of all the moving madness. Have a great weekend, and happy Mother’s Day!

A gorgeous poem about how we are able to see the people we love in animals.

The Retrieval System
By Maxine Kumin

It begins with my dog, now dead, who all his long life
carried about in his head the brown eyes of my father,
keen, loving, accepting, sorrowful, whatever;
they were Daddy’s all right, handed on, except
for their phosphorescent gleam tunneling the night
which I have to concede was a separate gift.

Uncannily when I’m alone these features
come up to link my lost people
with the patient domestic beasts of my life. For example,
the wethered goat who runs free in pasture and stable
with his flecked, agate eyes and his minus-sign pupils
blats in the tiny voice of my former piano teacher

whose bones beat time in my dreams and whose terrible breath
soured “Country Gardens,” “Humoresque,” and unplayable Bach.
My elderly aunts, wearing the heads of willful
intelligent ponies, stand at the fence begging apples.
The sister who died at three has my cat’s faint chin,
my cat’s inscrutable squint, and cried catlike in pain.

I remember the funeral. The Lord is my shepherd,
we said. I don’t want to brood. Fact: It is people who fade,
it is animals that retrieve them. A boy
I loved once keeps coming back as my yearling colt,
cocksure at the gallop, racing his shadow
for the hell of it. He runs merely to be.
A boy who was lost in the war thirty years ago
and buried at sea.

Here, it’s forty degrees and raining. The weatherman
who looks like my resident owl, the one who goes out and in
by the open haymow, appears on the TV screen.
With his heart-shaped face, he is also my late dentist’s double,
donnish, bifocaled, kind. Going a little gray,
advising this wisdom tooth will have to come out someday,
meanwhile filling it as a favor. Another save.
It outlasted him. The forecast is nothing but trouble.
It will snow fiercely enough to fill all these open graves.

“Until one has loved an animal, a part of one’s soul remains unawakened.”

Happy weekend, everyone! It’s going to be a dog-filled one for me: Running with Bo, volunteering at the SPCA, and then meeting Ozzie, a young GSD who belongs to our church secretary. Excited!

I think I could turn and live with animals, they are so placid
and self-contained,
I stand and look at them long and long.

— Walt Whitman, from “Song of Myself”