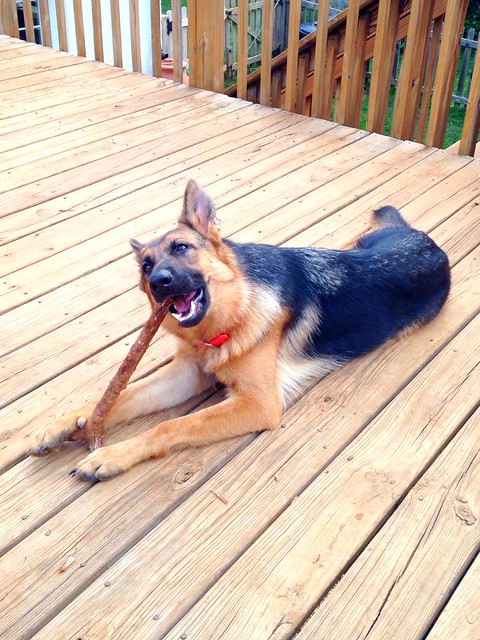 It feels a little hard to believe. Eden joined our family when she was 5 months old, just a skinny little thing, and now she’s growing up into a pretty young lady. She still acts like a wild adolescent 100% of the time, however — something I’ve been told may not change until she’s 3 or 4…

But we love her! We’re thankful for how she’s helped Pyrrha become a more confident, calm dog. The two of them have developed a very happy friendship, which I am pleased to note, after a somewhat tenuous beginning. Now, they have reached a pleasant equilibrium with one another, and they seem to enjoy playing together more than ever before. Watching them play tag and wrestle in the backyard is one of my chiefest delights.

Guion is especially happy to have “a dog of his own.” After Pyrrha unequivocally picked me as the Only Human in Her Universe, Guion was naturally feeling a bit left out. One of our goals for a second dog was a dog who loved Guion. Enter Eden! Thanks to their daily morning games of Frisbee, Guion and Eden have developed a strong bond, and she is just crazy about him. It’s very sweet. (As an added benefit, Eden and Guion’s congenial relationship has also encouraged Pyrrha to warm up to Guion.)

She continues to prove herself as a gifted Frisbee athlete, and we are thankful that her athletic interests involve retrieving (anything and everything). She also loves all people, sometimes too much; we really need to continue working on the don’t-maul-the-guests-with-your-enthusiasm behavior. But after we get past introductions, she’s able to present herself as a calm, mannerly lady, which makes us happy.

Eden has brought a lot of joy and madness into our house, and we are looking forward to many years with her!

Unlike many rescue dogs, we know Pyrrha’s actual birthday, because she came from her unscrupulous breeder (who was raided by the rescue, essentially) with AKC papers. On March 6, 2011, a shy puppy named “Katie” was born to a backyard breeder in rural North Carolina. We don’t know much about her life from birth until she turned a year old, but rescue reports were that she lived outside her whole life in a filthy pen with her relatives. She was neglected, painfully shy, and especially frightened of men.

We adopted her shortly after she’d turned 1, in mid-May 2012. The rescue had named her Lyndi, and she’d been recently returned to the rescue after a family with three young children learned that she wasn’t going to work out for them. (Understandable, because she is very anxious about small kids.)

Once we met her, in the parking lot of a PetCo, I was sold. In retrospect, it was a foolish decision. I had no idea what I was getting myself into, ha! Adopting my first dog, a dog with evident fear issues? Not the best decision I’ve ever made. But I don’t regret it. I was in love.

She had a rough time at first. As I’ve recounted before, she hid from us in corners of the house. She never wanted to leave her crate. She spent every walk with her ears flat back and her tail completely tucked under her. But, gradually, she started to get comfortable, and she bonded intensely with me.

Pyrrha still has issues and always will, but she’s my special girl. (Exhibit A, below, her ambivalent ears.)

My heart thrills when I think back to those first few months with Pyrrha and then think about how she is now. Still fearful, but, wow, what a different dog!

Our adventures in fostering and now, having adopted a second dog, have worked wonders on soothing her nerves. Pyrrha is most at ease when she’s with me at home and when she’s in the presence of another dog. Having psycho Edie around has already made a tangible difference in reducing Pyrrha’s day-to-day anxiety level.

At 3, Pyrrha is a content, calm dog. Yes, she’s still leash reactive. Yes, she grumbles at Eden from time to time. Yes, Guion is still on her “don’t entirely trust” list. But the progress she’s made! It’s enough to make my eyes well up.

Unlike many rescue dogs, we actually know Pyrrha’s birthday, since she was registered with the AKC by her breeder. And, so, today, she turns two!

She still has tons of puppy energy and quirks. Here, she is getting really excited about the stick in my hand…

Ah, a stick. Better than any kind of fancy birthday present!

We ordered this customized, handmade ID tag for her as well, although it hasn’t come in yet.

I love the look of the stamped, hammered brass! Make Your Dog Smile, the Etsy store, has tons of beautiful, modern ID tags. I love them all!

Happy birthday, darling Pyrrha. We love you so much, as very weird as you are. Life would be dull and monochrome without you!

How do you celebrate your dog’s birthday?