This past weekend, we had Roland (aka Pyrrha’s BFF) over for a play-date. But we forgot that dogs are SO lazy in this Southern, summer heat… and so there was a lot more lounging than playing going on. 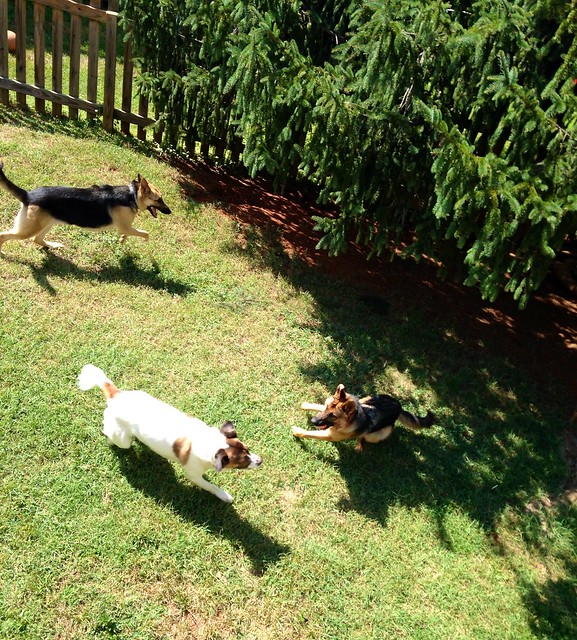 Still, I know the girls always enjoy having a friend over — even if everyone was fantastically lazy. 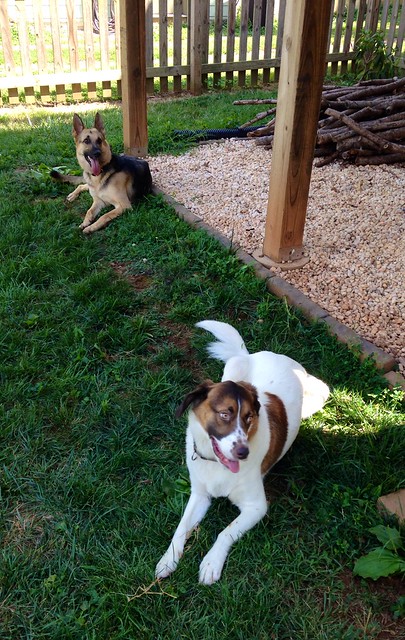 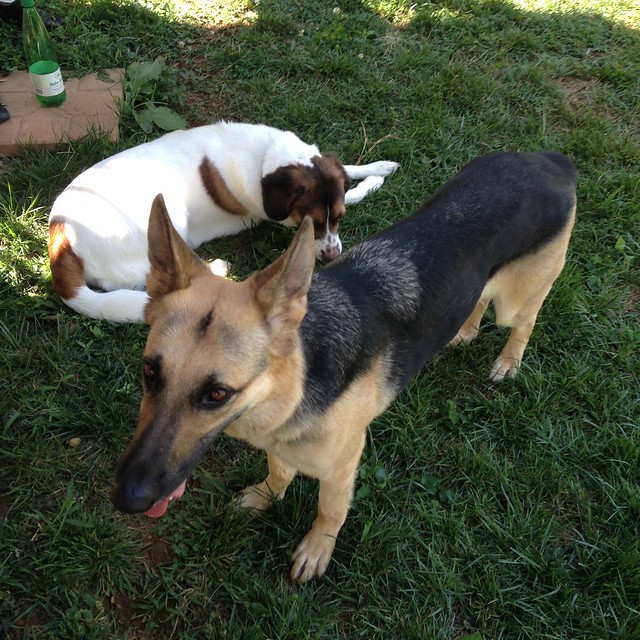 It’s always nice to have Roland visit, because Pyrrha is so familiar with him that I’m never worried about how she might react when he comes around. She is always at ease when Roland is over.

Eden is still learning how to chill out when dogs visit. We usually help redirect her insane barking and leaping by giving her a ball to chomp on; this keeps her engaged without going overboard and, importantly, it keeps her quiet. 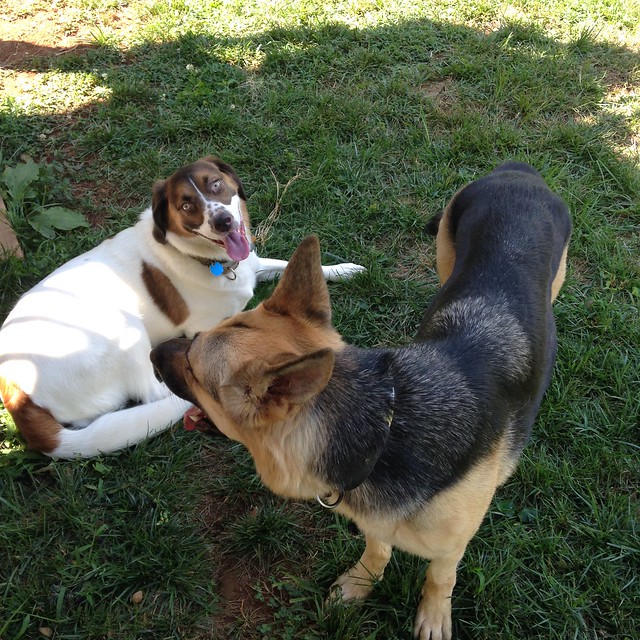 Does your dog have a best dog friend? The kind of dog that you’re always at ease about?

We had the pleasure of dog-sitting Roland this weekend. He’s a regular at our house, and we love having him. As I’ve mentioned before, he and Pyrrha get along beautifully, and Roland is very fond of Guion. He’s a very easy keeper, and we were very glad to have him around to romp with Pyrrha. She’s needed some canine company lately!

We love this weird little dude! We’re always tempted to keep him when he comes…

In any event, he’s a good model for the kind of second dog we’d be looking for: Very mellow, affectionate toward Guion (even preferring Guion over me), relaxed with all kinds of people and children, loves to play with Pyrrha. One day, we hope to find a Roland-esque pup of our own!

While we were away this weekend at my brother-in-law’s wedding, Pyrrha got to stay with Fiona!

As you can see from this blurry action shot, the girls had a great time together.

This was our first time leaving Pyrrha with non-family, and it apparently went well! Chris and Sallie (Fiona’s parents) are wonderful and thoughtful and did such a great job making Pyrrha feel comfortable. They reported that she was very shy and didn’t want to interact with them — which is her typical behavior in a new environment — but that Fiona’s presence was comforting to her. Pyrrha joined them on long walks, and she even had a play-date with a young golden retriever!

Sallie also reported that Pyrrha didn’t exhibit any leash reactivity on their walks toward other dogs. I was very encouraged to hear this, but it also made me think that I’m probably part of the problem here. My anxiety about seeing other dogs surely amps her up, too. Something to continue to be aware of!

We’re so thankful to have such great friends in town who can watch Pyrrha when we’re away. It really puts my mind at ease. I don’t think I could ever bear to board her in a traditional kennel environment. Hope we can return the favor for Fiona soon!

That said, we’re still in the thick of a really crazy season of life, so posting here may be more sporadic than usual. Thanks for your patience and kind comments, as always! Hope things will settle down soon…

As you probably know by now, one of Pyrrha’s favorite things is playing with other dogs. We’re really grateful for this, because it evidently brings her so much joy, and there are so many other things that make her so scared. So, we have gradually turned our backyard into an occasional dog park. Here are some of the things we’ve learned about hosting a play-date!

Cap the number of dogs, and know their personalities

I think, due to the size of our yard, and to the various complicating factors, four to five dogs is the max number of dogs we should have in the yard at one time. It helps knowing the personalities of the dogs coming, too. For instance, when we have rowdy adolescent males come over, we probably won’t invite a new puppy or a senior dog (and vice versa). It’s helpful to have a general idea of the canine personalities that are going to be in the mix. If you don’t know, we’ve preferred to play it safe and just invite one dog over at a time.

Set out a bowl of water

Nothing gets pups tired like wrestling and playing tag! We’ve found that, regardless of the season, the pups get thirsty very quickly.

No one likes to accidentally step in a land mine.

Put away any toys

To avoid any tussles over toys, I like to clear the yard of anything that could potentially cause a possessive scuffle. (Even though dogs, like children, will usually find something to pick a fight over, such as that enticing stray stick…)

Be vigilant and watchful during introductions…

… but don’t zone out entirely

Keep an eye on the dogs. Watch your dog’s behavior and watch for any warning signs (such as stiff body language, hard stares, etc.). I particularly liked this post on The Unexamined Dog about watching for pauses during play. Healthy, happy play sessions should have lots of little rest periods. Be ready to break the dogs up to give them “time outs” if needed. We learned this with Roland and Pyrrha; they would occasionally play too hard and too long, and then the play would start to shift into frustration and annoyance. We’d intervene, call them apart from each other, and then in five minutes, they would be OK to play again.

Get those leashes off

If introductions have gone smoothly, dogs naturally play better untethered! (Although we may let them drag the leashes for a few minutes in the beginning, just to make sure that everyone is at ease.)

Do you ever host canine friends at your place? What have you learned from your experiences?

This week, we are dog-sitting one of Pyrrha’s best friends, Roland. She, of course, is delighted. And they have been wearing each other out!

I think Rols is missing his family (especially his human dad, of whom he is particularly fond), but he has been settling in nicely. He seems to prefer men, so Guion is really enjoying all of the doggy love from Roland (something he still rarely experiences from Pyrrha). Roland, meanwhile, tolerates Pyrrha’s antics, and they like to play bitey-face under the table whenever they’re inside (which can often prove dangerous to human limbs).

You’d think I’d know this by now, having a rotating door of dog friends and fosters, but I am always surprised at how truly individual each dog is. Roland has his own set of quirks and habits, just like every other dog. It’s a good reminder that we can’t always be so universal in our approaches to dogs; a tactic that works for one dog may not work for another. Every canine personality is so complex and unique — rather like people.

That said, here are some little traits of Roland’s that we’ve noticed.

Overall, Roland is an easy keeper! We are happy to have him for the week, and we know Pyrrha is as well.

Have you ever had a live-in dog “boarder”? How did that experience go for you and your dog(s)?

Little Pyrrha stories from this week:

Guion called me yesterday and asked, “So, is too much dog toothpaste toxic?”

Oh, boy. I made another overconfident mistake with Pyrrha and thought we could trust her alone in the house, out of her crate, for an hour. She doesn’t get into anything when we’re home and we left her alone for 30 minutes the other day and nothing was touched; she was just dozing in her crate. So, I was all, “Sweet, she’ll be great on her own! We won’t even be gone that long.”

Pyr, however, found her canine toothpaste down in the bottom of a bin and went to TOWN on it. Guion said she was covered in gooey, green paste when he found her. It was all over the carpet, all over her paws, and the tube was obliterated. She’d sucked out all the paste and had started to chew up the plastic tube itself when Guion came home.

I proceeded to panic a little, and panicked even more when my I told my boss, she called her vet friend, and the vet friend said, “Call the animal poison control center immediately!” But Guion didn’t report that she was acting sick, and the toothpaste was a “natural” brand, so it didn’t have the typical chemical cocktail. And the poison control hotline costs $65.

So, I got in touch with her foster, her fairy-dog-mother, who recommended that I call the vet. I did, and they told me not to freak out, that she’d probably have an upset stomach and possibly vomit. She slept through the night without incident, though, and seems totally fine today, except for those sticky green stains still on her front legs…

What contraband item has your dog ingested? Did you freak out?

Pyrrha is still getting used to greeting other dogs on leash, but I think she’s made pretty significant improvements since we first brought her home. She is still scared of any and all dogs, but I’ve been relaxing my hold on the leash a LOT and calming down significantly, and I think that’s helped tremendously. Her hackles still go up and her tail still tucks, but she seems like she wants to greet them now and she hasn’t had any snarling or growling incidents in a month. We’re still moving slowly with it, but I have been delighted to discover one thing: CAMDEN.

There is a young female chocolate-colored pit bull who lives on our street. Her name is Camden and we often see her out walking with her humans. I don’t know what it is or why, but Pyrrha ADORES Camden. Camden is the only dog that I’ve ever seen Pyrrha genuinely happy to spot. She runs right up to her, all wags and smiles, and starts to play bow all over the place. Camden responds in kind, and the other night, the two of them romped around in our front yard for a bit (albeit on long leads). It totally made my day.

Camden’s humans were shocked when I told them that Pyrrha doesn’t like other dogs. “Are you sure? She is so good with Camden! She loves her!” They protested. I said it was true, but it seems that Pyrrha only has room in her heart for Camden. They seemed pleased and surprised to hear that their baby was the only one who could tame our fearful beast.

Camden doesn’t have a fenced-in yard, so I told her people that we really ought to have a play-date with the girls. We didn’t exchange any information, however, so I’m hoping we’ll run into them again soon and make that happen.

Does your dog have a best friend? A dog he or she instantly preferred over others, for seemingly no apparent reason?

After my big fail of an attempt to teach Pyrrha to target, I am happy to report that she has successfully learned the “touch” cue! I took a lot of your advice to heart and stepped back a lot before I tried to re-teach it to her. I tried again when she was in a happy, relaxed space and I didn’t make any suspicious movements (like trying to pick up a clicker). She learned the cue in about four repetitions, and now we’re practicing it in other rooms, environments, and with other people. She performed it successfully with Guion last night, too. I am hoping that this command will be a helpful focusing bridge for her when we start obedience school in a few weeks.

What new command or behavior is your dog learning now?