Eden is 11 months old today! Time flies when… your life is being ruled by a wild adolescent German shepherd.

Still, I can’t tell you how happy it makes me to see this pup finally gaining weight! 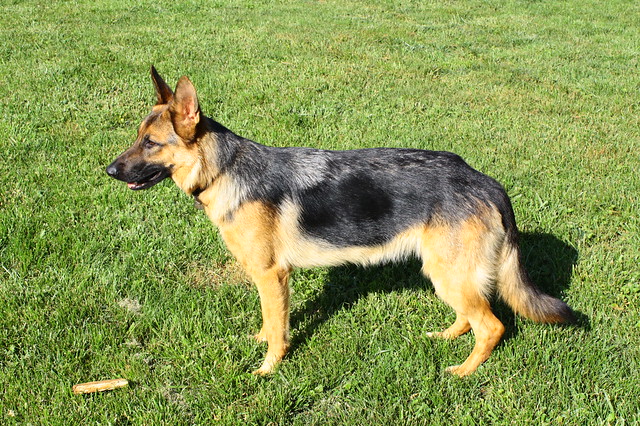 Thanks to her daily fish oil supplements, she’s also far less itchy, and her adult coat has developed a pretty, healthy sheen. 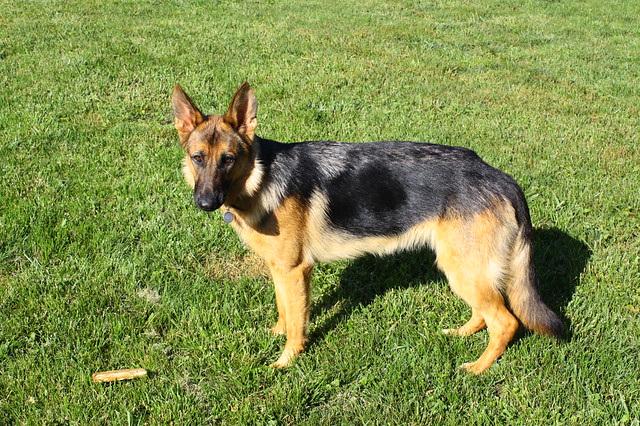 She’s turning out to be quite striking, if I do say so myself.

Now we just have to work at getting her more daily exercise; she never has enough. I think we need a team of teenage puppies to come wrestle with her every day.

I’m happy to report that after a few months of daily fish oil supplements, Eden’s itchiness — and the condition of her coat — have seen a dramatic improvement. Her coat is now much silkier, and she scratches herself far less often. I’m delighted with these results, and we will certainly keep up the fish oil supplements for her.

We were sent a sample of Itch Relief spray, which is put out by VetDVM.com, the organization that sends out at-home pet allergy tests. Unfortunately, because Eden’s itchiness had already more or less cleared up by the time we received the sample, we aren’t able to comment on its effectiveness. But it does seem like an interesting product and possibly helpful for more chronically scratchy dogs.

Have you ever used an itch relief spray for your scratchy pup?

Disclosure: We were provided with a sample of the itch spray, but we were not able to try this product ourselves, so we cannot attest to its effectiveness.

The good news: Eden is all clear for giardia!

Ugh. I kind of wondered if this would happen. We’ve been so vigilant about cleaning up the yard, but my best guess is that Eden transferred it from all of the kissing. She licks herself, and then she loves to lick Pyrrha’s mouth. We also got their food bowls mixed up, so there could have been a remnant there, too. Anyway, now Pyrrha is undergoing treatment, and our house is in a police state. The poor girls don’t know what’s going on, or why we yell at them for licking themselves and then trying to kiss each other. Just hope it will all be over soon!

The additional good news is that, aside from the giardia, Pyrrha had a good annual check-up at the vet. She’s at a trim 64 lbs., and the vet complimented the health of her coat and teeth. Pyrrha was a huge baby about the exam itself, but our vet is a pro with shy dogs, which is wonderful. And as soon as the vet and vet tech pulled out some treats, Pyrrha acted like she’d never been afraid of anything, throwing tricks right and left. Such a diva.

Eden is finishing up her first heat, finally. It lasted about 10 or 11 days. I thought she had a UTI, because she had started peeing small amounts in her crate, which she had never done before. We did a urine analysis, though, and it came back normal, so the vet thinks it’s probably just related to her heat, but we’re keeping an eye on that as well.

Moral of the story: Don’t have dogs?? I don’t know. We couldn’t have prevented any of this (as the vet thinks Eden came to us harboring giardia), and I am assuaged by the fact that none of these health issues are the direct result of them being German shepherds, but I still feel like blaming their breed. GSDs are genetically cursed, right?? You gotta blame someone! Hah. Our wallet is suffering.

Unrelated: Thanks everyone for all of the comments and great conversation on yesterday’s post about the pro-purebred and pro-rescue camps. I always enjoy hearing from all of you and your experiences! 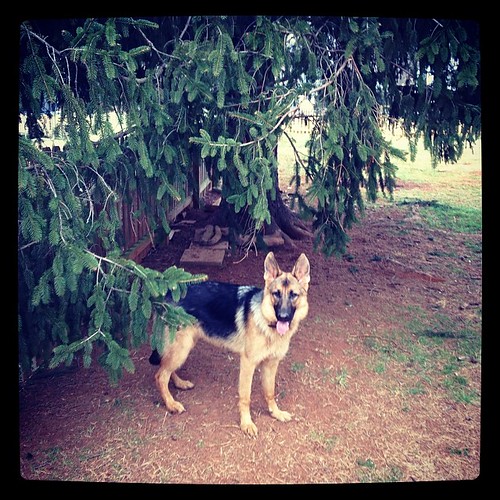 Happy Friday to you all! What’s been going on in your households lately?

“The dog has seldom been successful in pulling man up to its level of sagacity, but man has frequently dragged the dog down to his.”

How sage is your dog? I’d say that Pyrrha has a fair level of internal sagacity, but Eden’s sagacity levels likely dip around zero. I saw a post somewhere this past week arguing that German shepherds, especially working-line GSDs, have the most hellish adolescent periods of maybe any other breed. I BELIEVE IT. Although I’d put my money on a malinois or a kelpie… But yeah. I sometimes feel like Eden is never going to grow up and is going to live out the rest of her life keeping us in a state of terror.

Speaking of Eden, I’m in a middling state of panic about her health and how underweight she is. But I need to be patient and wait to see how she reacts to these antibiotic/probiotic treatments. It feels hard to keep calm.

(Sidenote: Whew, young Marlon Brando. What a beautiful asshole. I still feel so good about naming our first foster Brando. It fit him perfectly, and his new family decided to keep the name!)

Any fun weekend plans? We are on hands and knees, prayerfully begging for SPRING! And for the yard to dry up, at least for a few days… Have mercy on us!