On Saturday, Eden’s first birthday, my family took the dogs (and Dublin) to Fisher Farm, this wonderful nature preserve near my parents’ house. We wanted to wear the dogs out and let them practice their off-leash recall, so we brought long drag lines for our girls and a little bag of tiny pepperoni and treats for reinforcement. 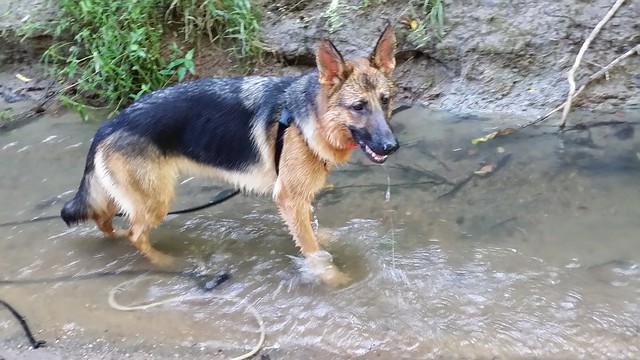 I didn’t have my camera with me, so unfortunately, I don’t have any great photos of this wonderful afternoon. But these were the highlights:

Playing in the River

Dublin, being mostly lab, is a natural water dog. Our dogs aren’t, as far as we can tell. On Friday, at my grandparents’ house, Eden jumped in the lake when we called to her and quickly panicked. I’m glad we were there to help her get out, because she did not like being fully submerged in the water and unable to stand. 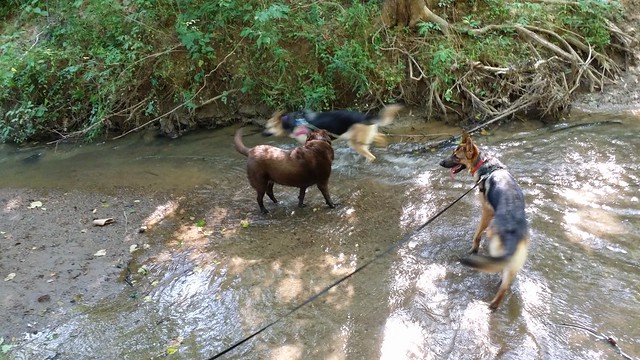 But there’s a little river that runs through Fisher Farm, and we thought the girls would like that. We were right! They both had a blast splashing in the water and running through it. My dad was able to snap a few blurry phone pics: 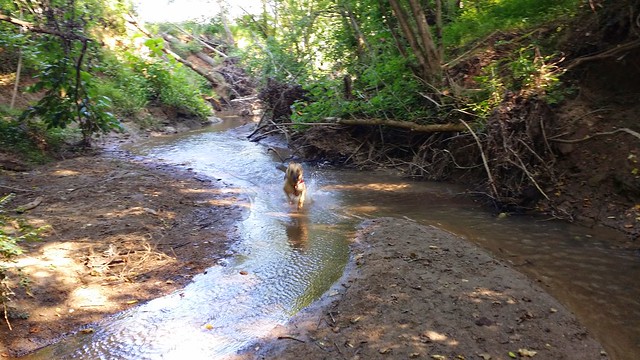 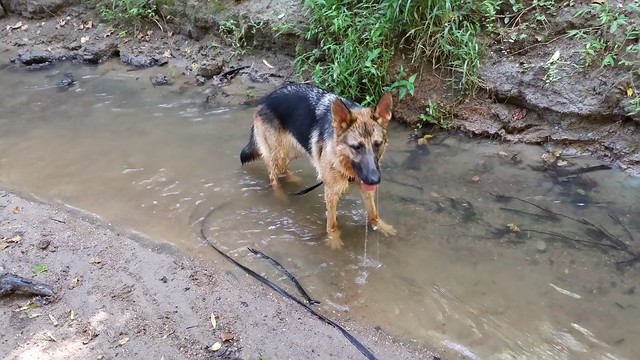 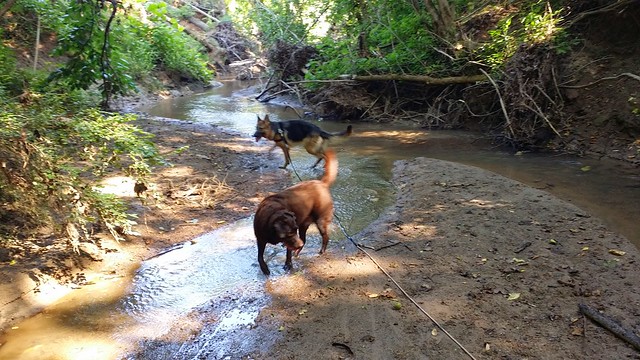 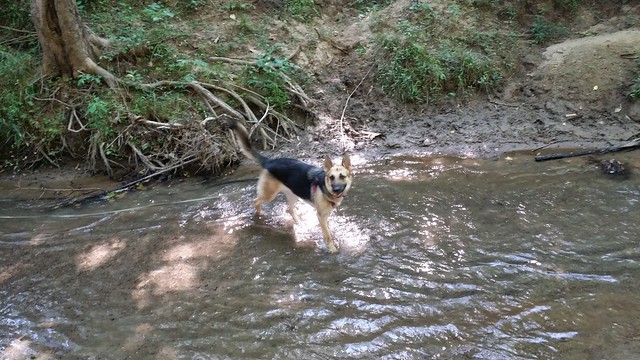 (You get the idea, right? They had SO much fun.)

And, if you’re interested, there’s even a tiny video of the girls running in the river.

Watching them romp in the river was wonderful, but I think our adventures in off-leash recall were the most heartening to me.

Dublin, as I’ve mentioned, has the most perfect recall I’ve ever seen in a dog; my dad can call her back from chasing a squirrel or approaching another dog. She’ll stop on a dime for him. Our girls? Not so much.

So, to practice, I had a bag of treats, and we had both girls on drag lines during our hike through the woods and in the fields. We’d practice letting them get ahead of us and then calling them back, at varying distances, and rewarding them warmly with praise and treats. They all quickly caught on to this gambit, and soon, all three dogs would come running to us whenever we called. I was so pleased.

Pyrrha is still an absent-minded wanderer at heart. I don’t think she’ll ever be fully reliable off-leash. I’m also the only person that she really wants to come to, which can naturally be a hazard if I’m not around and she escapes. But I was especially pleased with Eden’s performance. Of all three dogs, even Dublin, Eden was the one who wanted to check in the most. If she got out of sight from the humans, she was always the first to turn around and come back to us, even without being called. Her natural disposition toward people is evident here.

I hope we’ll continue to make the time to practice this in a safe place. It made my heart happy to see how joyful and relaxed both girls were off leash. Pyrrha especially is such a different dog. Having to wear a leash makes her so tense.

Curious to hear from you: What’s your dog’s recall style? Is he or she a wanderer? Or does he or she stick close by you all the time?

Toward the end of our hike, a female deer suddenly shot of out of the brush near the field, and Pyrrha was off like a shot. I mean, she was GONE after that deer. My natural hunter (Dublin and Eden were not at all interested). I panicked a little, and Dad and I started to run after her. The grass was very tall, and the woods she ran into were deep, and she was completely out of sight.

But… a few minutes later: Pyrrha comes running back up to us, exhilarated and breathless. Such excitement on her face! No deer meat for dinner, but I was very proud of her for returning to us, without much frantic encouragement or freaking out on my part. She was on deer alert for the rest of the hike.

All in all, it was a perfect afternoon, and an ideal dog birthday party.

Over this Christmas holiday, our time with Pyrrha was also spent encouraging and training her off-leash recall.

On Christmas Day, we took her out to the field near my grandparents’ house on her 30-foot line. Guion was outfitted with some leftover pulled pork as encouragement.

This field was the perfect practice ground. No one lives out there; we weren’t going to encounter any other dogs or people; and the field is bordered by a thick forest and part of the lake. The big field also made me feel more comfortable, because she could never truly get out of sight.

We dropped the line, and to my pleasant surprise, she really wanted to stick with us. She wandered ahead of us, sniffing, as every dog is wont to do, but if we got too far back, she’d stop and reorient. I was very proud of her.

Below is one of my favorite pictures ever (taken by my sister), of Pyrrha running to me. She’d gotten too far out, and she came sprinting back to me when I called. Guion, in the left foreground, is preparing some pork rewards for her.

Christmas afternoon, we went back to the field to practice with Marley, my cousin’s labrador. Marley is also good off-leash, so he was great accompaniment for Pyrrha. He was mostly preoccupied with fetching on our field walk, but he remained a great center for Pyrrha, who is still easily distracted by her nose and all that she picks up.

And then, when we got back to my parents’ house, we did even more off-leash training.

My dad always wants to practice Pyrrha’s off-leash recall when she comes to visit, and we’re lucky to have Dublin as an aide. Dublin, as I’ve mentioned before, has the best recall I’ve ever seen in a dog. I’ve seen her stop in MID-CHASE of a squirrel to a command to come. It’s miraculous.

Unfortunately, I didn’t get any photos of our outing, but it might have been the best day of Pyrrha’s life. We went with Dublin and her human family to a large preserve out in the rolling countryside where dogs are allowed to roam. We walked the trails and Pyrrha kept her long line on, but we didn’t hold her leash once. She ran with Dublin through the forest, totally free and happy. We encountered a veritable pack of other dogs (six, I think) that day, but all the humans were smart enough to just drop the leashes and all the introductions went beautifully.

The most shocking moment was when Dublin scampered down a bank and jumped into the creek to splash around and swim. Pyrrha has always been antsy about walking through rivers, and so I assumed that she wouldn’t want to get in. But she started whining, watching Dublin play in the creek, and so I said, “OK!” She ran down the steep bank and leapt into that water like a deer, huge grin on her goofy face. I was totally shocked. She was delighted.

There were two moments in which she got too far ahead of us, and I couldn’t see her anymore, and I started to panic, but Dublin would go find her and Pyrrha would quickly reorient to my voice. I gave her a small treat reward each time she came back to me, whether voluntarily or by responding to my call. All this to say, it was a great week of practice for her. She’s still not reliable off-leash, but she’s a lot more reliable than I thought she would be, and I was proud of the progress she’d made. Definitely something to keep working on! I’m motivated by the fact that she seems so happy to be unencumbered.

How is your dog with off-leash recall? How often do you get to practice this?