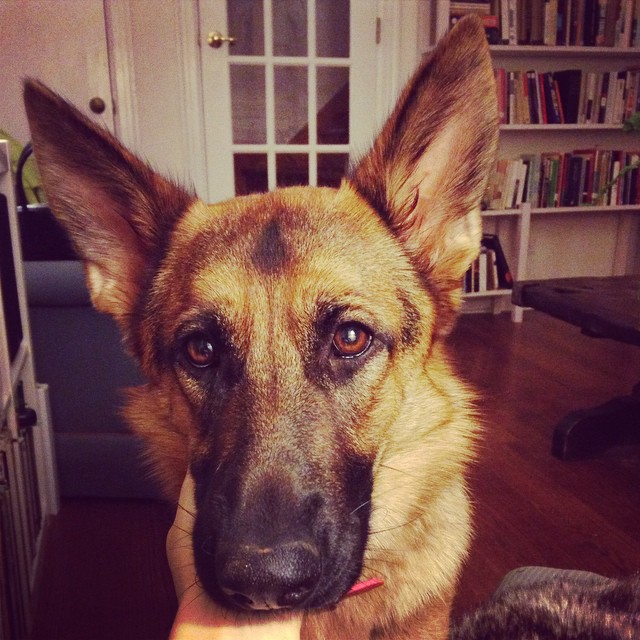 While her elegant posture and regal gaze may imply magnanimity, Pyrrha’s expression here should really be interpreted as: I hate you forever for grooming me.

Because my “DOGS” board on Pinterest was getting almost out of hand, I decided to create a corollary for it: “Woman’s Best Friend,” a collection of photographs and artwork featuring women and their dogs. If you are also a crazy dog lady, I think it will make you smile.

Happy Easter and Passover, or, just happy weekend if you observe neither!

“The greater love is a mother’s; then comes a dog’s; then a sweetheart’s.”

Today is my birthday. What am I doing to celebrate, you ask? Running a 10-mile race tomorrow morning that I am woefully under-prepared for! What would I rather be doing? Taking my dog on a long, slow walk. Maybe some day… Have a great weekend, everyone.

A gorgeous poem about how we are able to see the people we love in animals.

The Retrieval System
By Maxine Kumin

It begins with my dog, now dead, who all his long life
carried about in his head the brown eyes of my father,
keen, loving, accepting, sorrowful, whatever;
they were Daddy’s all right, handed on, except
for their phosphorescent gleam tunneling the night
which I have to concede was a separate gift.

Uncannily when I’m alone these features
come up to link my lost people
with the patient domestic beasts of my life. For example,
the wethered goat who runs free in pasture and stable
with his flecked, agate eyes and his minus-sign pupils
blats in the tiny voice of my former piano teacher

whose bones beat time in my dreams and whose terrible breath
soured “Country Gardens,” “Humoresque,” and unplayable Bach.
My elderly aunts, wearing the heads of willful
intelligent ponies, stand at the fence begging apples.
The sister who died at three has my cat’s faint chin,
my cat’s inscrutable squint, and cried catlike in pain.

I remember the funeral. The Lord is my shepherd,
we said. I don’t want to brood. Fact: It is people who fade,
it is animals that retrieve them. A boy
I loved once keeps coming back as my yearling colt,
cocksure at the gallop, racing his shadow
for the hell of it. He runs merely to be.
A boy who was lost in the war thirty years ago
and buried at sea.

Here, it’s forty degrees and raining. The weatherman
who looks like my resident owl, the one who goes out and in
by the open haymow, appears on the TV screen.
With his heart-shaped face, he is also my late dentist’s double,
donnish, bifocaled, kind. Going a little gray,
advising this wisdom tooth will have to come out someday,
meanwhile filling it as a favor. Another save.
It outlasted him. The forecast is nothing but trouble.
It will snow fiercely enough to fill all these open graves.