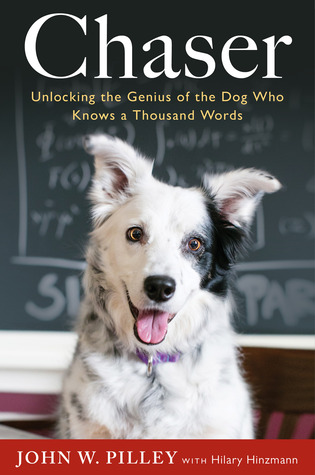 By now, I think the majority of us have heard about Chaser, the border collie with the BIG vocabulary. Even people who aren’t that into dogs have probably seen Chaser on TV, in a documentary, or read about her feats in the media. If you haven’t, here’s the summary: Chaser knows 1,022 words. Yes, that many.

Her human, Dr. John W. Pilley, a psychology professor at Wofford College, taught her these words (mostly proper nouns) in an effort to prove that dogs have an intelligence far greater than we generally expect. Pilley was also motivated by reports about Rico the border collie, who reportedly knew 200 words, and he thought, “I could teach Chaser to do that.”

Chaser’s repertoire was confirmed with a battery of tests, which resulted in a paper, which then took the animal cognition world — and the rest of the world — by storm.

I was enamored with Chaser — and Dr. Pilley — when I first saw them in the NOVA documentary with Neil deGrasse Tyson. (I also feel this perhaps irrational fondness for Dr. Pilley, because his demeanor and mannerisms remind me so much of my grandfather, who, coincidentally, graduated from Wofford College, which is a TINY, almost unheard-of school in South Carolina. They both have a similar manner of speaking and moving, and they both seem to be animal whisperers. Random connection, but I had to share!)

I was delighted to win this book in Maggie’s giveaway on Oh My Dog! and certainly enjoyed reading it. I knew a little about how hard Pilley worked with Chaser, and it was illuminating to read about the hours and hours of training and work he did with Chaser — and still does. She is obviously a smart dog, but she sounds like she has a really lovely personality as well.

I also enjoyed reading about Pilley’s history with dogs, particularly his account of his former dog Yasha, a German shepherd/collie mix, who sounded like a real gem of a dog. Yasha was given free reign on the Wofford campus, and Pilley often used him in his classes, asking students to teach Yasha a command that he didn’t already know. (I also cried over my lunch when Yasha died.)

In short, it’s a sweet book about a devoted man’s relationship with his very bright dog — and a poignant reminder to never take our dog’s intelligence for granted. Even if we don’t have a dog with a Chaser-level intensity or working memory, we have a very bright, sentient being who watches us much more closely than we think.

Disclaimer: I won this book in an Oh My Dog! giveaway; I was not compensated for this review nor asked to write it. I just like to write about the dog books I read!