Lately, I have been thinking about this post on My Rotten Dogs and about the division between the pro-rescue and pro-purebred camps of dog lovers. Can they peaceably coexist?

I am unequivocally pro-rescue. Both of our shepherds were adopted from Southeast German Shepherd Rescue, and we served as a foster home for SGSR pups for about a year (something I’d love to start doing again one day). The beauty and mercy of rescuing a homeless dog is a matchless feeling, and that is a tie that really binds.

But I am not anti-breeding or anti-purebred dogs. Our dogs are both purebred, and I am an advocate for ethical breeders, because I have seen first-hand what irresponsible, negligent breeders can do to dogs, both physically and emotionally.

I will always have a rescue dog in my life, but that doesn’t mean I don’t see the serious benefits of raising a purebred puppy from Day One. I believe that Pyrrha, for instance, could have been a totally different dog if we’d met her at 10 weeks of age instead of at 1 year.

Rescue dogs, almost by definition, come with some kind of baggage, or at the very least, an element of mystery. This doesn’t mean that they are going to be screwier than a purebred, by any means, but it just means you know a lot less about their background and heritage.

Anecdotally, the most stable dogs I know are purebreds raised from puppyhood by their current owners. The dogs I know who have the most issues to work through are almost always the rescues, even those that were raised from puppyhood. This doesn’t mean that it’s impossible to have a purebred who is a psychopath, or that it’s impossible to have a totally sound, issue-free pound puppy: both definitely exist. But the odds of having a dog with some form of baggage to work through is greater if you’ve got a rescue pup.

I confess that I sometimes get jealous of the people who have carefree, sound, emotionally stable purebred dogs (like Josie, Heath, and Loki). These dogs all came from responsible breeders, and the dogs are a testament of their breeders’ conscientiousness and their owners’ care. Josie, Heath, and Loki can go anywhere and do anything; they have no fear issues or reactivity; they love people, children, and other dogs. I marvel at them sometimes.

Of course, there are also rescues who are essentially bombproof (Roland and Zoe come to mind, of the dogs I know). They do exist. But when a dog-loving person buys a purebred puppy, I put aside my rescue righteousness and think, “I get it. I really do.”

I was talking with Carolyn, Josie’s mom, about this very issue during our recent play-date. Her first German shepherd, Maya, was a rescue, and Maya had some fear issues and reactivity issues with other dogs, among other things. Josie, however, came from a highly respected working-line German shepherd breeder and entered Carolyn’s household as a puppy. Josie is unfazed by most things and is a very smart, stable dog; she was the most laid-back dog at the play-date.

“Maya was my heart dog,” Carolyn said, “and I would never say anything against her, but my life with Josie is so much easier. I almost feel like I have more joy in my relationship with Josie, simply because she has fewer issues.”

That struck a chord with me. I would never trade Pyrrha or Eden for the world, and anxious Pyr is my heart dog, too, but I sometimes dream of a life with less anxious, high-strung dogs.

If you’re in the rescue camp, support ethical, responsible breeders. I believe people are always going to want purebred dogs, so if we accept that as truth, we should support great breeders. Champion breeders who do their research, who produce the best possible version of a breed, and who care about the mental and physical health of their dogs. The world needs more breeders like this. If you have friends looking for purebred puppies, point them in the right direction to such breeders as these (and not to pet shops or backyard breeders).

If you’re in the purebred camp, support smart, proactive shelters and rescues. Share your knowledge of a particular breed with a breed-specific rescue (like where our girls came from). Volunteer as a foster home or as a dog walker at your local shelter. Get to know your local rescue organizations and learn about their missions and their needs.

In conclusion, I am still a person who would tell people to rescue before they bought a purebred puppy, but I will never judge anyone for the decision they make, as only that person knows what kind of dog is best for their family and lifestyle. Even though I think I’ll always have rescues, I still dream about choosing that “perfect” purebred puppy.

When you acquire as much knowledge about a subject as we* have, it’s hard to stop ourselves from becoming unbearably opinionated and judgmental. (*I say “we” because if you’re reading this blog, you probably have a deep, abiding interest in dogs, dog culture, and canine behavior, more than the average person.)

But let’s stop judging each other for our decisions. You bought a purebred puppy from a great, responsible breeder? Good for you! You adopted a mix-breed dog from a shelter? Good for you! Either way, good tidings and blessings in your adventures in dog raising.

Do you ever find yourself having to withhold judgment, on one side of the rescue/breeding camp or the other? How do you think rescues and breeders can do a better job supporting each other? 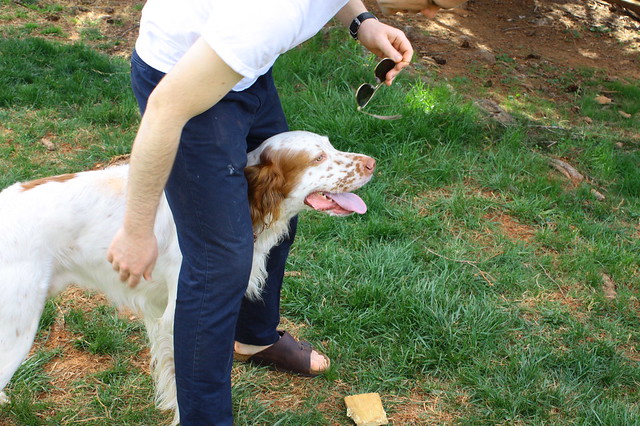 Sunday, we had a much-needed play-date with beautiful Josie. Josie is a 1-year-old German shepherd from a well-respected local breeder (Blackthorn Kennels), and her human mama was the one who bravely brought us our very first foster, the hulking sweetheart Brando.

We have been talking about getting our shepherd girls together for a long time, so I’m glad that it finally happened!

The girls had a great time together, as you can see! They wore each other out quickly, which was wonderful.

Josie has a comparable play style with Pyrrha, who can be a little bossy with other girls. Josie didn’t mind, however, and was able to perfectly match Pyrrha’s love of wrestling and chasing.

We hope to have sweet Josie over again soon! We always love making new dog friends.