Related to my thoughts on the impeccably mannered British dog and to my dad’s practice with our dogs off leash this summer, I have started to piece together some conclusions about why European dogs have their ish together so much more than American dogs seem to, on the whole.

Some generalizations based on my limited time living in London:

Obviously, not every dog in Europe is well-adjusted. (I saw a miniature schnauzer try to bite the head off a baby Maltese in the street, but this was mainly because the schnauzer was straining at a leash and his owner was shouting, “BE NICE! BE NICE!” which was definitely ineffective and only escalated the situation.) But overall: Such polite dogs.

This is the trifecta of good behavior that I feel like the majority of US dog owners I know (myself included) just dream of for their dogs.

And so who is to blame for maladjusted dogs acting up in public? Obviously, we humans are. These are the conclusions I’ve drawn:

Leashes are very helpful and an essential safety component of the 21st-century dog’s life, but I daresay we misuse them more often than we know. I know I am at fault here and that my poor leash-handling skills are often to blame for my dogs’ reactive outbursts. I transfer a lot of tension to the lines when I see another dog, because I also get anxious.

I also have not trained Eden in loose-leash walking, at all. Pyrrha, being so shy, naturally has always wanted to stick close to me, and so I assumed I was just an awesome dog trainer and was magically teaching her how to loose-leash walk, through mind transfer or something. False. Pyrrha just had no interest in pulling. Eden, on the other hand, thinks she’s a husky. Sigh!

So, up next in my chain of pondering all of these “perfect” European dogs: How can I improve my leash-handling skills? More thoughts to come. 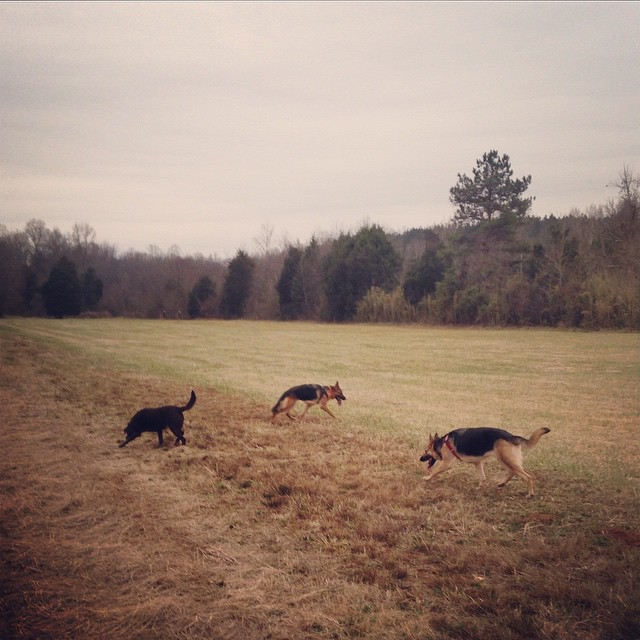 What do you think? Are leashes (and thus humans) partly to blame for a lot of the reactive dog behavior we see stateside?

I recently took a walk with a friend on a big section of a popular trail in town that runs along a river. The trail system spreads for miles around the city and it’s a very popular route for dog people, for obvious reasons. In just an hour of walking, we saw tons of people with their dogs: A pregnant woman with her older shih tzu and pomeranian puppy; a little boy with his all-white American bulldog; an elderly man and his elderly mixed breeds; a parade of labs; a woman and her chubby Australian shepherd; a woman and her very vocal dachshund; a young guy and his Great Pyrenees…

The one thing that did surprise me, however, was how many of these dogs were off-leash, despite the fact that there were many signs posted along the trail stating that all dogs have to be leashed. None of these off-leash dogs seemed particularly “dangerous”–the two old dogs were so slow that they were barely walking, and the young lab who was off-leash was so fixated on the stick in his owner’s hand that he wasn’t looking at anyone else. We also saw a young male spitz/collie mix who seemed to either be a stray or to have been left behind by his humans, because he wasn’t with anyone. (He ran off in the woods before we could get that close to him to look for identification tags.)

Confession: I can be as guilty as the next person about sporadically breaking leash laws. Dublin and Dally are never leashed when we’re at the park in my hometown, mostly because the park is sparsely populated. If we do ever see a dog, we leash them, but they’re usually romping free, and Dublin, for one, is extremely responsive to verbal commands. I’ve hiked a trail with Bo off-leash, too, but it wasn’t an official trail, so there were no leash laws governing it. In general, though, I always leash and try to use common sense about it. It’s safer for everyone. So, I know this. I just wanted to admit my hypocrisy up front.

But. On this particular trail, seeing these many off-leash dogs did make me a little nervous about using this trail in the future. It’s not like it’s a sparsely used park or an unofficial path in the forest; this is a heavily trafficked trail system, used by all sorts of people: Dog people, young families, teenagers, bikers, runners, and even the city’s homeless.

What if we have a dog who isn’t great with other dogs rushing up to him or her? Our dog would always be leashed, but you can’t control an unleashed dog from rushing forward. (*Side story: Zoe and I narrowly escaped a potentially frightening situation like this. I was walking her in her neighborhood, and a young German shepherd was loose in his front yard. There were college students standing out in the yard, too, but none of them were looking at the dog, who started to charge toward us, growling. I stopped behind a hedge and shouted over it, “PLEASE leash your dog!” Thankfully, they heard me and grabbed the dog and we could continue without fear for our lives…)

How do you prevent this situation from escalating–an unleashed dog rushing up to your leashed one? Have you ever encountered this before?