Thanks to you all for your advice regarding our goal of switching up sleeping arrangements and gradually giving Eden more freedom in the house. 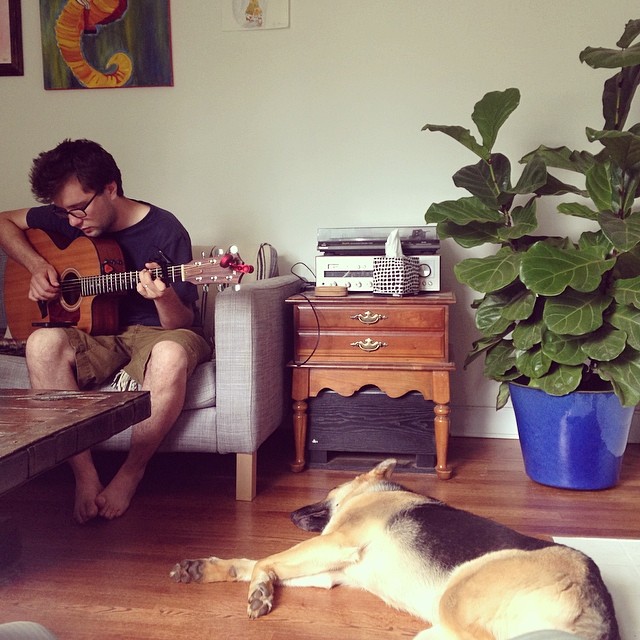 We’ve made a few domestic changes, and I’m happy to report that things are going well.

We are still proceeding with caution, but I’m very pleased with how well this new set-up has been going. It also makes me happy to know that they don’t have to be crated all day on weekdays and can enjoy that modicum of independence to sleep where they please and move about freely. Eventually, I think we’ll work up to a place in which both dogs won’t use the crates at all during weekdays. For now, though, this arrangement has been going smoothly. I’m happy, and I think the dogs are happy!

What’s your domestic, weekday schedule with the dogs? What kind of privileges do they have when you’re not home?

Where does your dog sleep?

For the past year, Pyrrha slept in her crate. She likes her crate; it’s her safe place. When she feels overwhelmed by a situation, she’ll retreat there, and we’ve always left that as an option for her.

As of last week, though, we’ve been experimenting with a new routine: Pyrrha getting to sleep wherever she wants in the house.

For a while now, I’ve wanted to give her this freedom in the house, and I think this is a good way to ease her into it. She has proven herself to be very reliable in the house, and she has not shown any inclination to get into things she’s not supposed to. Pyrrha is kind of the perfect house dog in that way; I can count on one hand the number of things she has chewed up that she wasn’t supposed to.

So, this is Pyrrha’s new sleep routine: We leave her crate door open, and say “Goodnight!” I think this confused her the first few nights; she would run into her crate, and then when I didn’t close the door, she’d peek her head out and look at me, like, “Um, mom? You forgot something…” But she’s adapting quickly. I think she sleeps in crate still, but she also has a dog bed in the living room (and she also considers our couch fair game for naps).

The weird thing she does now, though, which is not my favorite, is that she comes into our room at 5:30 a.m., sticks her nose in my face, and wags her tail against my nightstand. I mumble, “Chill out,” and then she lies down on the floor next to me, until I wake up (around 6:15–6:30). I’m not sure why it’s been exactly 5:30 a.m. every day. It’s not light out yet, so I’m curious why that time has a trigger for her.

All in all, though, it’s been going well!

Where do your dogs sleep? Did you ever transition them from one routine to another?